We buy and sell beautiful and unique gemstones that inspire the creation of fine jewelry, heirlooms that will last generations.

We like to say that the Gem Trade is the second oldest profession on earth!

Why did mankind bestow such value on the colored pebbles found in the sand, or in riverbeds thousands of years ago?

Beauty, Magic, Inspiration… Our mission is to buy and sell only beautiful and unique gemstones that inspire the creation of fine jewelry, heirlooms that will last from generation to generation which is why, at Mayer & Watt.…

“We deal in Inspiration… naturally”

All trade sectors dealing with ​“natural” materials are dealing with the issue of adulteration and the gemstone business is no different. Major amounts of material make it to market every year in the United States without proper enhancement.

You can be assured that we, at Mayer & Watt, go to extremes to ensure that we are up to date on the latest methods of enhancement and will, at all times, disclose and educate our customers.

Our goal in business is to help you, our customer, make money, grow your business and enjoy selling colored gemstones.

We might not always make a sale, but we always guarantee you a laugh in the process!

Our ethics are grounded in creating long term relationships and sleeping well at night!

When you make a purchase from Mayer & Watt, you get more than a gemstone, because.… 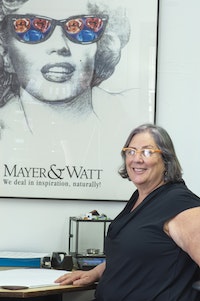 Laurie began working in the gemstone business as a part-time bookkeeper in the Los Angeles office of a German stonecutter, Hans-Dieter Haag in 1978. Within a year she was managing the office and had found a job she was ​“turned on” by! She was lucky enough to be able to sell some of the earliest Tsavorites, Tanzanites, Malayas ever to come out of East Africa. In 1981 Simon joined as a salesman but within a few months, Hans-Dieter decided to make some changes, and Laurie and Simon set up Watt Gems in their dining room.

An office in Beverly Hills came next and for 12 years we operated from there and in 1987 formed a partnership with another German cutting house, August Mayer. So began Mayer & Watt and we have retained that name to this day, although we ended the partnership, on very good terms with our dear friend Uli Mayer in 1994.

We spent the first ten or so years focusing on gemstones from East Africa and South America, staying away from the Big Three, but in 1994 we began traveling to Sri Lanka and broadened our inventory horizons to include sapphire. We have since also worked with emeralds from Zambia, Colombia, and recently Ethiopia, although our Ethiopian adventure has sadly ended. Currently, we stock mainly Zambian Emeralds.

Laurie has always been fully involved in all aspects of the business, right through the birth of our two children, and now is lucky enough to have welcomed our son, Geoffrey into the company since 2009.

She has been a member of the Women’s Jewelry Association since the ​’80s, was very instrumental in starting the Ohio/​KY chapter, served as President, and is currently a Chapter Leader, sharing her experience with chapters around the country. Laurie is also involved in several local community groups. 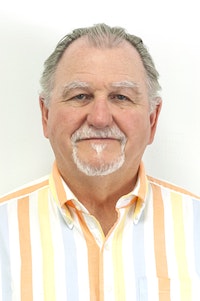 Simon was working as sales director in the medical field in Harley Street, London when he met Laurie at a dinner party in Los Angeles and after only knowing her for 10 days found himself proposing marriage in the Holiday Inn Broadway Hotel in January of 1981 in Tucson AZ!! A whirlwind engagement of six weeks ensued and in April of that year, he moved with his new bride to Los Angeles.

After a few months of arriving he made an impromptu visit to the Tourmaline mine owned by Bill Larson in Fallbrook, with an old friend of Laurie’s, Marc Jobin, and his fate was sealed! He pulled a tourmaline crystal out of a pocket underground and was immediately infected with the magic of gemstones. After only a few months selling at Hans-Dieter Haag he set up Watt Gems in November of 1981 and with Laurie, the journey began.

After creating Mayer & Watt we joined the AGTA and he was soon asked to join the board. Simon served on the board of AGTA for a total of 15 years, twice as Vice-president, over the next 25 years.

He served 6 years on the board of Jewelers Mutual Insurance company and currently is serving on several local boards within his community.

One of the greatest challenges came when Geoffrey came into the company as the ​“father-son” dynamic began to unfold, but it has been a wonderful growth opportunity not just for the company, but personally, especially as Geoffrey has brought so many new skills and perspectives to the business. 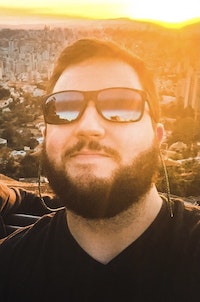 Geoffrey started his journey in the industry being a road warrior for Mayer and Watt. Through his time on the road he decided the industry had more space to grow in. He made lots of big moves building an App that was gemstone inventory in your hand. If you haven’t downloaded it the link is Right here .… But his relationships on the road mixed with his push to innovate has set his work apart.

We deal in inspiration... naturally