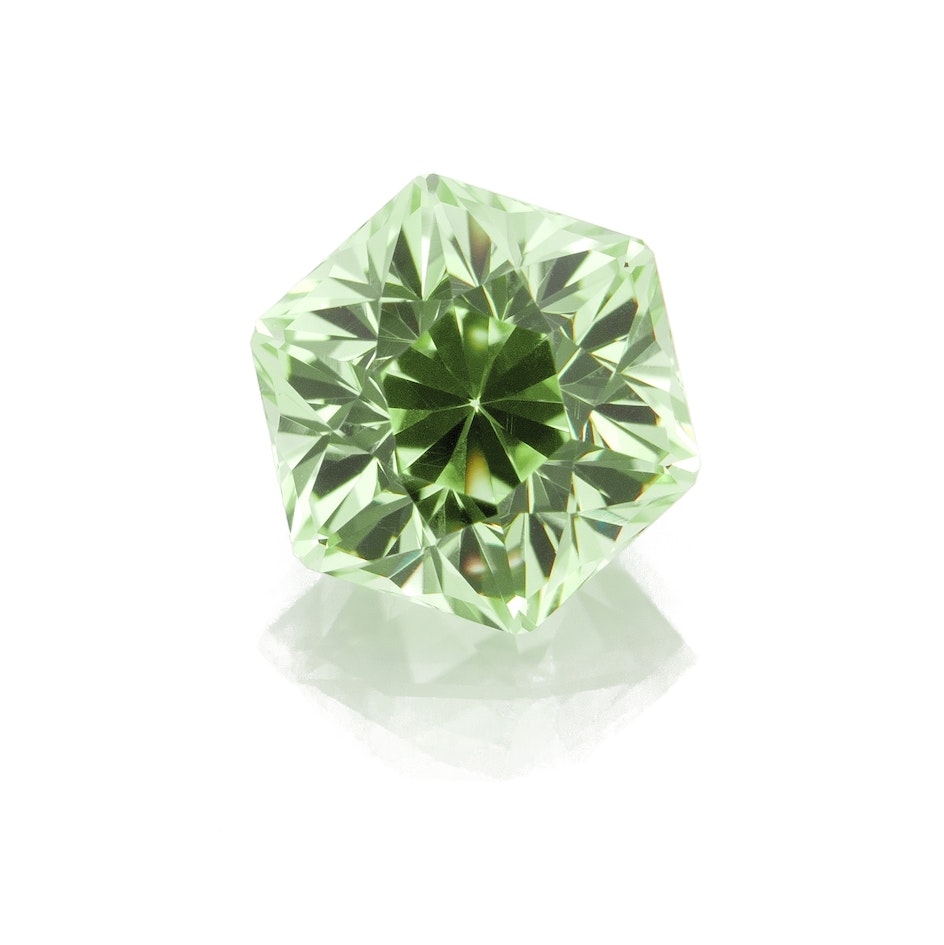 The morning stillness, broken only by faint birdsong and the soft dance of a breeze throughout the garden, washes over you. The quietly unfolding spring, rejuvenating your senses for a lingering moment in time, sighs like the delectation of holding a mint Merelani garnet inside of your palm. Much like a glittering drop of dew, mint Merelani's icy greens pop with a demure wildness that stops you in your path. When displayed at its prime, mint Merelani's brilliant greens are laced with a note of blue and whose brightness seems to illuminate from within.

Mint Merelani is the very light to the medium-light toned green form of the grossularite variety of the mineral group and gemstone, garnet (Ca3Al2Si3O12). Sharing the same gem material classification as its brothers, tsavorite garnet and green grossular garnet, mint Merelani's ethereal tones in combination with its high index of refraction put it in a category of its own. Gaining its fresh color from dustings of vanadium and occasional traces of chromium, its greens can range from yellowish green to slightly bluish-green. Mint Merelani's ready ability to disperse light becomes poignant in its fusion with its lighter tones, bringing a rainbow of colors back to the unaided eye.

Named in honor of its minty hues and the origin of its finest examples, mint Merelani garnet's glacial greens have earned it fame across the globe. Though pistachio-colored garnet was originally discovered alongside tsavorite in 1967, it lacked the delicate combination of factors to inspire titles. The Merelani Hills of Tanzania became the notable locale that justified discernment after almost glowing, cucumber-green garnet was discovered within pockets of its tanzanite mines in the late 1980s. Green grossular garnets of varying qualities can also be found outside of Tanzania, notably in Kenya and Madagascar.

Mint Merelani garnet chimes in at 7.25 – 7.5 on the Moh's scale of mineral hardness, making it a glistening choice to be set into jewelry that won't see everyday wear. Those born in January have their selection of garnet colors to pick from as a birthstone, while the zodiac's Aquarians find mint Merelani garnet to be a spiritual stone. A gem that comes out of the ground as beautifully composed as the day it's fashioned, mint Merelani is a rare beauty that largely goes untreated. Metamorphic in formation, finished gemstones over two carats in weight are uncommon and collectible.