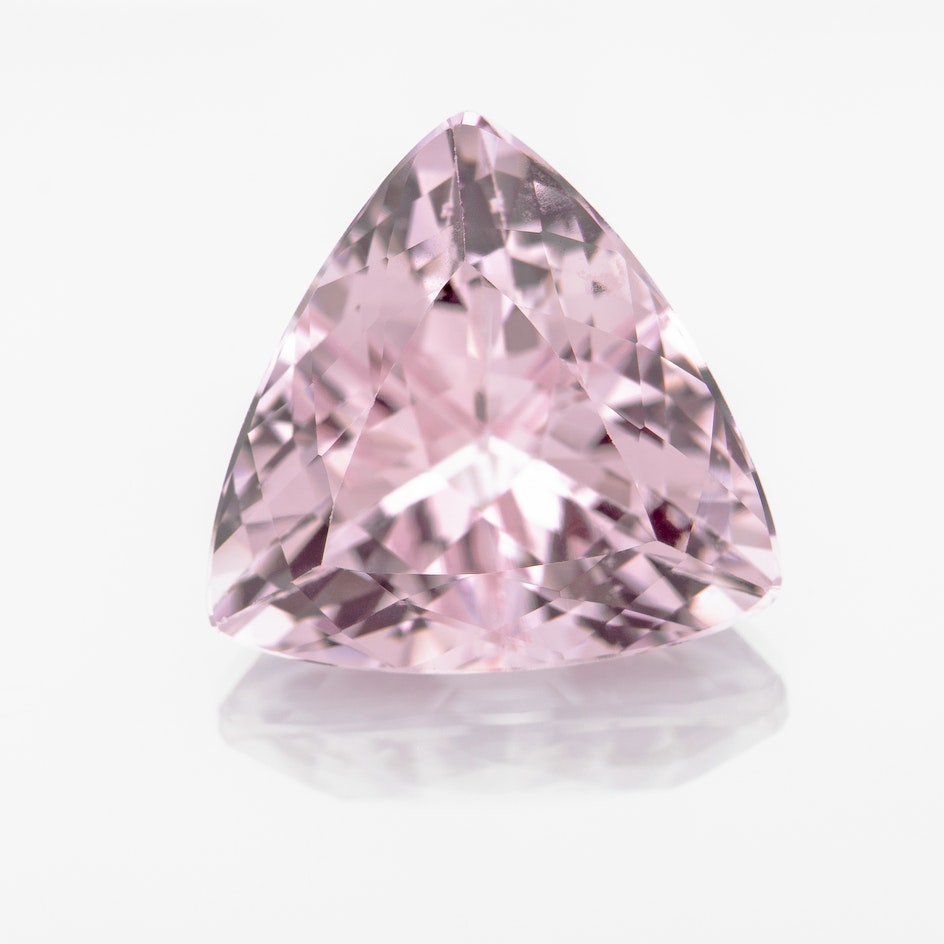 A blushing bride, pink-tinged cheeks framing a face lit up in delight, would have much in common with morganite, the gemstone whose faint flush lies captured under its surface. Intrinsically refined, the soft shades of morganite's pastel pinks dance in celebration of their peachy and rose` hues, bubbling like champagne in a glass. At its best, morganite shows a pure pink to purplish pink with strong saturation of color. These more fully colored stones are mostly found in larger sizes while stones of smaller scale translate with a more delicate air.

Morganite is a pink to an orangey-pink-hued variety of the gemstone and mineral beryl (Be3Al2(Si O3)6). Trace amounts of manganese within its structure cause the typically colorless crystal to gain its alpenglow. Morganite is commonly found in pegmatite pockets, whose roomy nature can allow for large and stable crystal growth. This solid formation creates availability for macaroon-sized gems with a high degree of clarity. Highly pleochroic, expertly handled orientation in cutting is required to bring out morganite's best color.

Though morganite has been popular in modern years, its naming as a distinct gemstone didn't take place until 1910, when a significant deposit was found in Madagascar. Accomplished gemologist and famed scholar, George Kunz, proposed the name to the science community in honor of his friend, gem collector, and Tiffany & Co. client, J.P. Morgan. This original morganite finds from Madagascar has long been the prime source for top color saturation. Today, morganite can be found in Brazil, Mozambique, Afghanistan, Namibia, Nigeria as well as the United States.

Falling within the range of 7.5 – 8.0 on the Mohs scale of mineral hardness, morganite is excellent for use in occasionally worn jewelry. Though its hues speak to the modern bride, its ability to hold up to daily wear is not overly strong. Though not officially a birthstone, morganite is a lucky gem for those known as Libra under the zodiac. Morganite's purer pink color is commonly brought to its best light with heat treatment, irradiation, or a combination of both. The detection of these treatments is virtually untraceable by gemological labs, making it wise to assume that most morganite on the market has been treated. The proliferation of irradiated Morganite on the market has brought a relatively inexpensive stone to the jewelry marketplace.