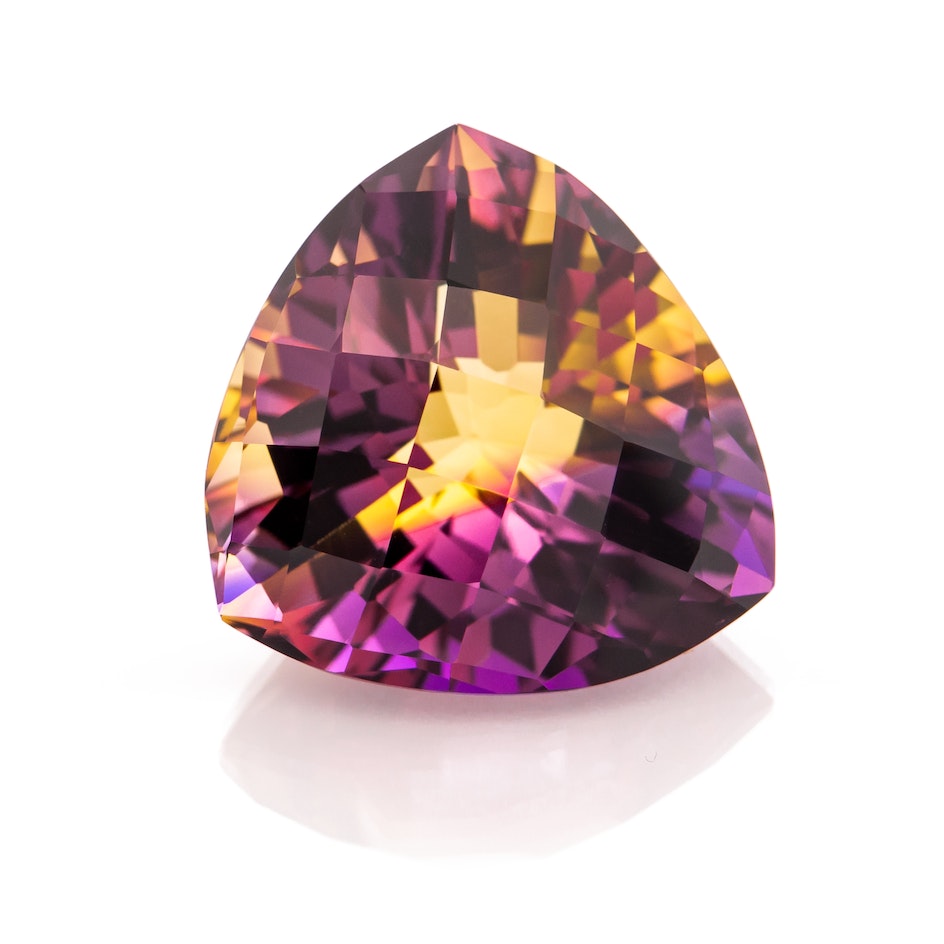 African Violet, crocus, and pansies all bloom in yellows and purples, honoring nature's repetitive complementary pairing that brings ametrine its fame. A meeting of violet to purple amethyst and golden yellows of citrine within a single quartz crystal is known in the trade as, “ametrine”. Coined to bring both varieties of quartz to mind simultaneously, it describes the bi-color feature of the gem perfectly. Alternatively known as trystine or bolivianite, ametrine's mixture of amethyst and naturally rare citrine emphasizes the infrequency of the occurrence taking place. Ametrine has never been mined from locations other than from within Bolivia's borders at the Anahi Mine.

Ametrine's dual-color zones give thanks to differing states of oxidation among iron impurities within the quartz crystal (SiO2). The varying states of oxidization are created from a temperature gradient across the crystal during its formation. This change is caused by natural radiation points within close range to the host rock. Ametrine can be lightly or deeply saturated and is often seen with zones of colorless rock crystal quartz. Finer ametrine displays strong yellow oranges and vivid purples to the eye without interruption of its color zoning.

Lore tells that when ametrine was first introduced to the world, it was brought to a Spanish queen as a gift from a traveling conquistador who had married into royalty in Bolivia, home of the Anahi Mine. However, its source was kept relatively secret and the bi-color stone didn't surface in scientific literature until the 1920s. It wasn't until the late 1980's that naturally occurring ametrine was significantly available through commercial mining. Today, ametrine can be converted from amethyst through the use of partial heat and irradiation treatments to the crystal. Additionally, lower price point ametrine can be attributed to the industrial invention and production of synthetic quartz crystals.

A 7.0 on the Mohs scale of mineral hardness lends ametrine as a worthy gemstone to be displayed in jewelry. Though ametrine is not an official birthstone, it's been known as a delightful choice for those whose beloved were born in November and February. Though traditionally cut in an emerald-shaped, step-cut styling with an even split in color, ametrine has picked up the notice and use of famed carvers and stone cutters who push the boundaries of the imagination with their arts.