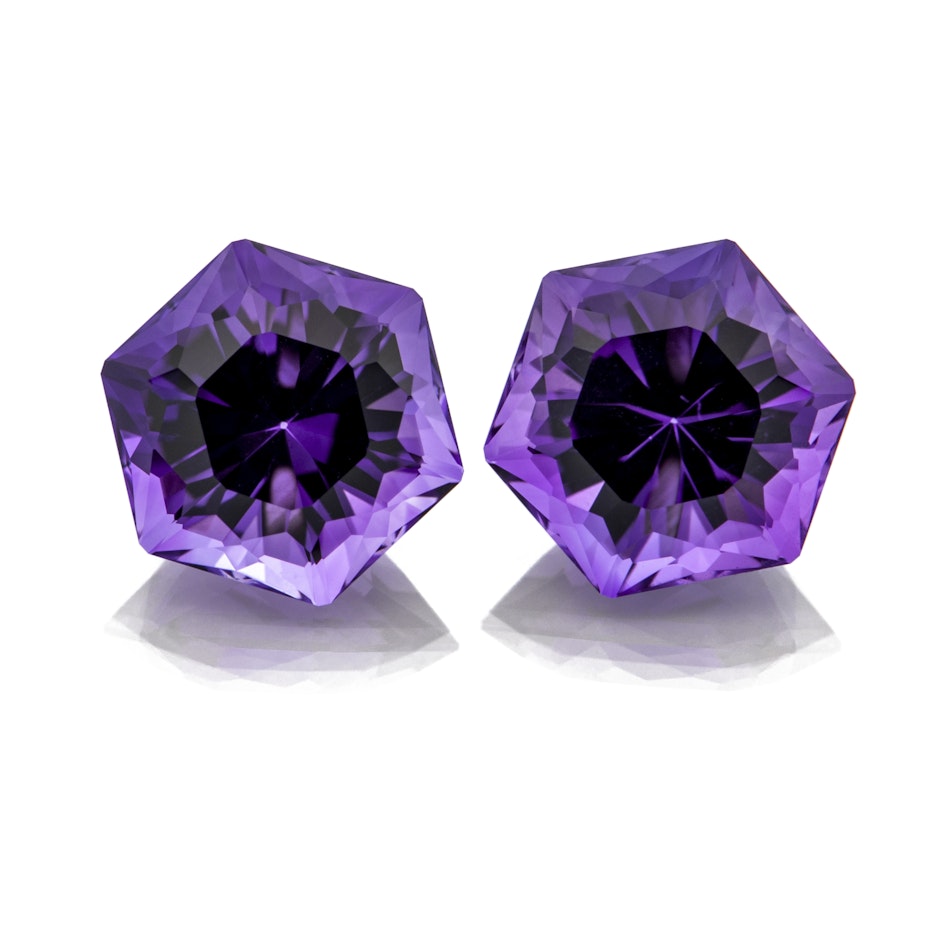 Purple – The color of wealth, nobility, creativity, and courage. Historically prized across cultures for its rarity in nature, amethyst's signature purple hue has continually captured the fascination of humans. A variety of the mineral and gemstone quartz, amethyst is arguably the most well-known gemstone across the globe. Possessing a body color that can range from cool, bluish violets to warm, reddish purples, each amethyst's desirability is found within the eye of its beholder. Some gravitate to the feminine, lightly saturated “Rose de France” amethyst, while others seek out the prized, intensely saturated purple hue with flashes of blue and red, dubbed often called "Siberian" after a very fine deposit from the early part of the 20th century.

Amethyst's purple tinge is attributed to color centers within quartz's chemical makeup (SiO2) and crystal structure. These concentrations of color are formed when trace elements of iron are found and become exposed to natural irradiation within the earth. Due to the inconsistency of these color centers, amethyst must be expertly planned out by a cutter to display an even tone back to the eye. Gem amethyst without visible color zoning from all angles is difficult to come by and increases the stone's value. Unheated amethyst is a dichroic gem, showing blueish-purple and reddish-purple when viewed from different angles. The presence of a “red flash” in amethyst is considered an important factor in the finest quality.

Amethyst can be found across the span of the globe, each source garnering uniquely beautiful selections of the stone. The most prized specimens were historically found in the Ural Mountains of Russia and Siberia, where Catherine the Great sought them out in droves. In modern times, most amethyst is mined from Brazil and Uruguay, where it is grows in large geodes within volcanic rock. Zambia, Madagascar, India, Austria, and Canada are just a few of the other bountiful sources of amethyst.

At a 7 on the Mohs scale of mineral hardness, amethyst is a suitable gemstone for jewelry and adornment. February babies boast amethyst as their birthstone, while the Zodiac names it the birthstone of those under the sign of Pisces. The name amethyst is derived from the ancient Greek word “amethustos”, meaning to be sober, and was said to ward against a state of drunkenness. Different cultures have coined amethyst as a stone of great power, many believing it will bring quick wit and intelligence, luck with business affairs, fast healing, protection against fear and guilt, or spiritual wisdom to the wearer.