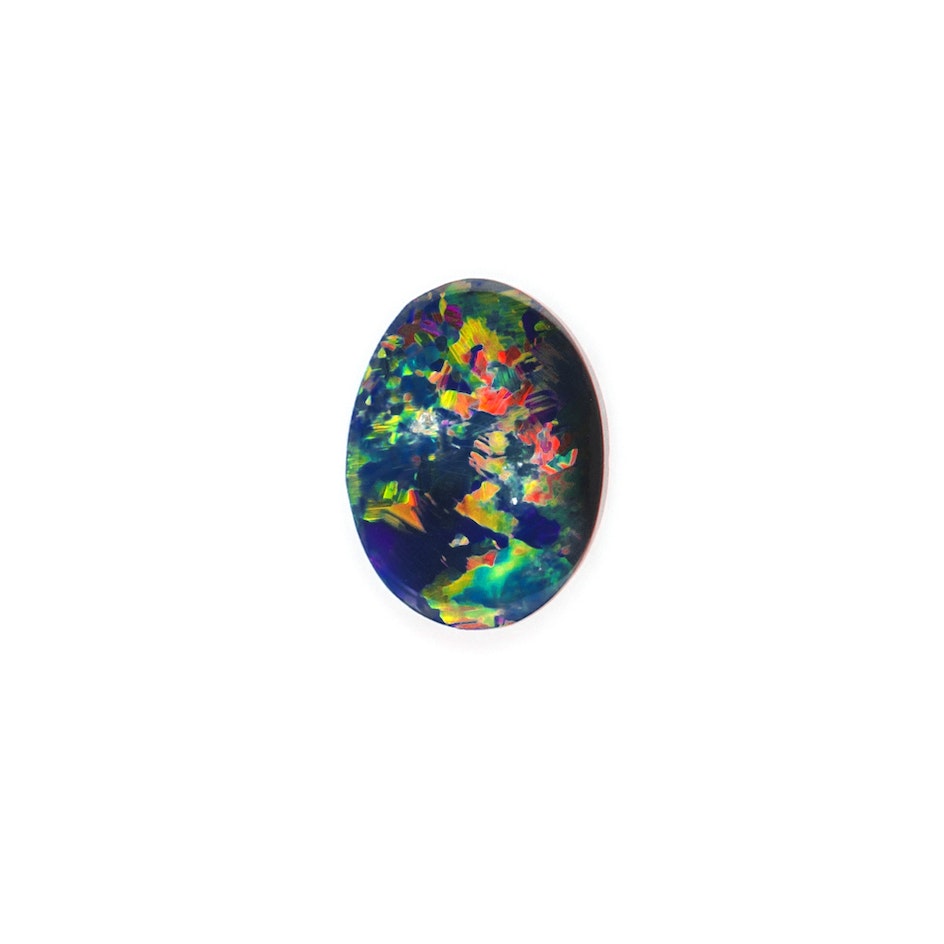 An opal is unlike any other Earthly thing. Its colors have been called hypnotizing, seeming to pull their subject inward through veils of intricately woven color. Historically prized across all borders of the globe, opal's flashes of reds, oranges, blues and green have been imitated by artists, poets, writers, photographers, and merchants alike. Yet, fine opal's display can rouse such awe when viewed in person that all of mankind's translations fall short in adequacy. Like rainbowed lightening in the palm of your hand, opal's fireworks are some of nature's more breathtaking secrets.

Opal's impressive parade, called play-of-color, is due to its unique formation. Unlike most crystalline gems, opal is a water-bearing form if silica (SiO2·nH2O) without atomic structure. Typically found in ancient waterbeds, opal gains its mass over years through the settlement of microscopic layers of silica spheres. When these spheres are sized variously and fall without particular order, they create opal without play-of-color. Upon the chance that the silica spheres are uniform size, they'll fall in line with one another to create a grid. These orderly spheres and their arrangements dance with light and bend spectral colors back to your eye. Red and orange colors denote smaller, more compactly rare silica orbs.

Opal can be found around the world in an assortment of types. Black opal from Australia has long been a standout source, garnering specimens with dark backgrounds that allow play-of-color to contrast in extraordinary ways. Boulder opal also hails from down under, where it is cut to feature its veneer-like relationship with its host rock. White and crystal opals from Brazil, the United States, Ethiopia, and Australia feature angelic body colors that illuminate with mixed levels of transparency. Mexico gives us fire opal, a smoldering rendition of the gem with red, orange, and yellow body colors.

Ranging from 5 to 6.5 on the Mohs scale of mineral hardness, opal is a soft gem that can be set and worn in jewelry, but requires care. It retains a level of water content, so caution should be taken with heat and arid storage. Opal's contact with harsh chemicals should be avoided. Sharing the privilege of being October's birthstone with tourmaline, opal is also a stone of fortune for Libra and Aquarius under the Zodiac. Due to opal's global demand and large range of market, it's infrequently known to be the subject of treatments, as well as cemented assembly and imitation. The value of opal is evaluated by the impact of the play-of-color pattern, spectral color display, transparency, and clarity.